The alarm went off at 3:30 am and I truly leapt out of bed. Excited for an early morning adventure – I poured fresh brewed coffee into my mug, gathered my cooler and coat, then hit the road.

I was driving through the dark morning hours up Highway 133 in southwest Colorado, making the right hand turn a ways up the road – to wind up over Kebler Pass that late, chilly October – down into Crested Butte. With Venus and the Moon winking at each other above me, the drive over was magical feeling, but black. During daytime hours, Kebler can look like this: 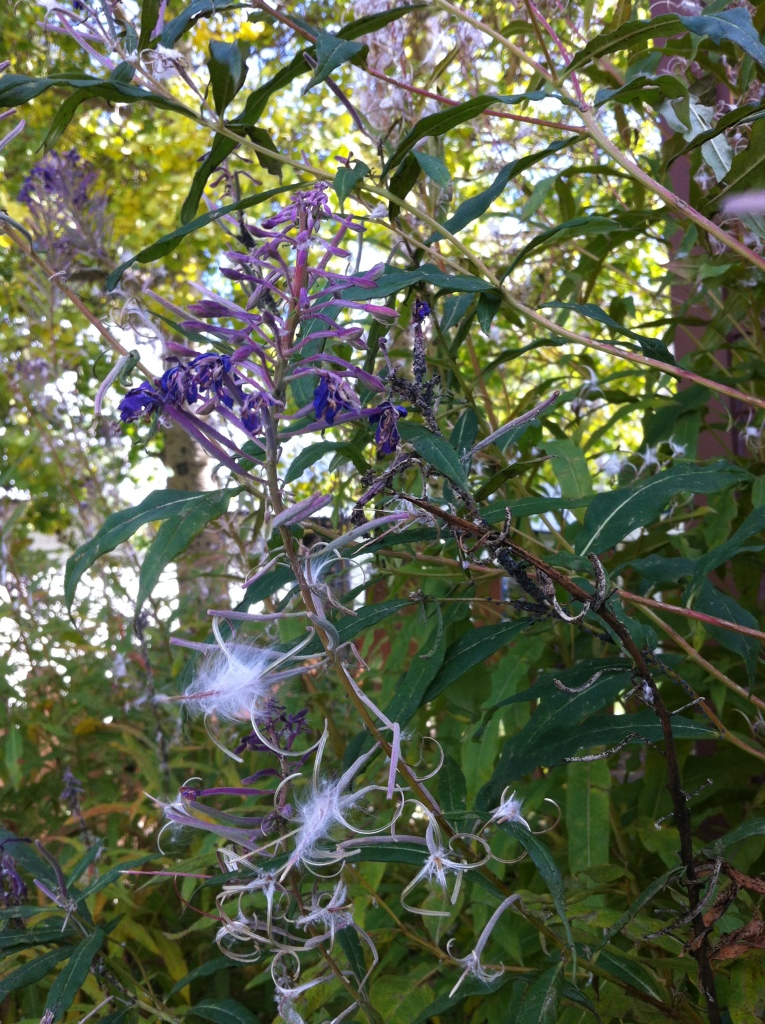 It was this gorgeousness that was hidden all around me, in those early morning hours, following the path my headlights bobbed and shone in front of me. I was headed to the Roaring Judy Fish Hatchery just on the other side of Crested Butte. Every fall for four weeks there is a kokanee salmon giveaway – and when I heard about it, something almost primal in me rose up and needed to be there.

Granted now, you do take your place in a line, car after car after pickup and jeep, on the gravel road that leads into the hatchery, and wait your turn. It is not exactly a wilderness experience. But a great one. Camaraderie abounds. Each person receiving an allotment of salmon must have a fishing licence, and your take is based on the count of heads, both human and fish.

At the end of the season, these salmon will all perish, hence the give-away – if you are willing to get in line (and people arrive VERY EARLY), you will receive. I truly honor these beautiful fish. Kokanee is from the Okanagan language, a Native tribe from British Columbia.  For more history, the following is from The Fence Post: Rural News from Colorado and Nebraska:

“The (Roaring Judy) Hatchery was purchased by the Division of Wildlife in 1963 and in 1966 when they began to rear the trout eggs, the name “Roaring Judy” fish hatchery was given by the Gunnison school children.

Fishing for kokanee salmon in Colorado depends on collecting spawn from mature kokanee, about 3 – to 4-years-old. This happens at several locations in the state, but as all Pacific Salmon, the fish will die soon afterward. To enable the public to make use of a resource that otherwise might be wasted, Colorado Parks and Wildlife conducts salmon giveaways at spawn-taking stations through the fall.

Kokanee are a land-locked form of sockeye salmon. Each April 2-inch kokanee fry (or fingerlings) are released from the Roaring Fork Fish Hatchery into the East River. Their overnight journey takes them down the East and Taylor rivers to the Gunnison River and onto Blue Mesa Reservoir an other waters including Granby, Williams Fork, Vallecito and McPhee reservoirs, where they typically spend three to four years maturing. In late August, the salmon begin their trek back to the hatchery and the run usually lasts through October.

Division of Wildlife personnel spawn the salmon at the hatchery, taking 3,000,000 to 10,000,000 eggs per year. These eggs are put into the Hatchery through the winter with regulated water running over them. In the spring they are put into the outdoor holding tanks until they become about 2-inches long and are then returned to the river waters or trucked to the other reservoirs.”

I met two French brothers who had driven all the way from Denver, very jovial and likely interested in the fact that I was a single woman 🙂 waiting in line on the fish just in front of them. We struck up a conversation, and I shared with them I used to cook in a Continental French restaurant. They wanted to tell me all about preserving the roe, should any female kokanees I received have an intact egg sack (or skein) inside. Making it involved preparing a bit of salt brine with a dash of sugar and a little white wine or champagne vinegar. (I did find some roe, small and rosy colored – made the casual recipe and scattered it over homemade sushi, thanks to them.)

One of my favorite features of moving back to Paonia, Colorado is the International Dinner Club – a fabulous collection of foodie friends who make monthly themed dinners. This month was Native American cuisine, at my house. And though I didn’t have Kokanee salmon at the time, I did make a wonderful oven cedar planked sockeye salmon with homemade chokecherry honey glaze and caramelized sliced onions.

These photos feature the kokanees, however, that I brined and hickory smoked. If you enjoy freshwater fish, they are excellent. 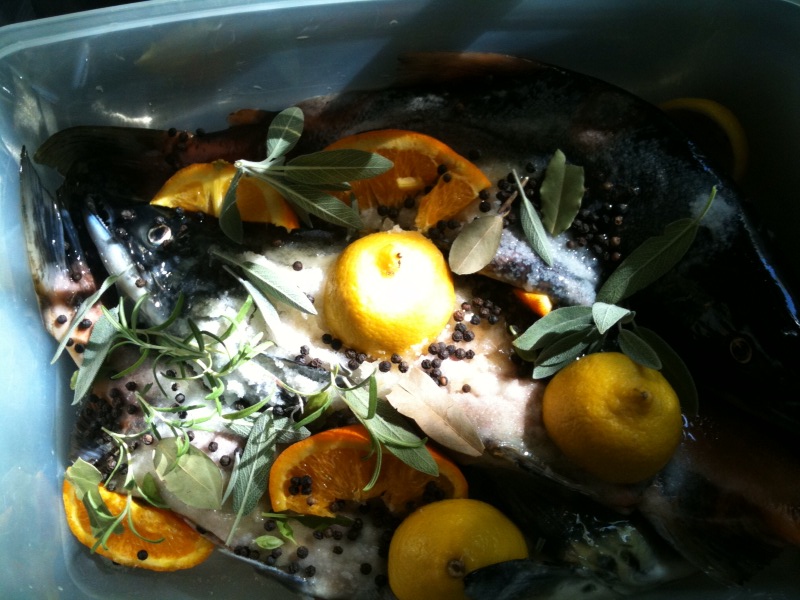 This brine is especially good with salmon, of any kind. I’ve smoked them with cedar and mesquite wood before too – can’t go wrong! Adjust your water/salt/honey measurements as you need to, to cover the fish.

Stir brine ingredients together. Cover whole cleaned salmon with brine, and refrigerate overnight. I usually stuff the cavity with a few of the citrus pieces, making sure peppercorns and herbs are nestled in as well. Turn fish once or twice so brine solution can be uniformly absorbed. Prepare your grill (including another heat source – charcoal/gas grill) – and wood chips of choice. I recommend soaking the chips in water for at least a half hour prior to their use. Place whole fish on the grill (your choice if on a large piece of foil with holes punctured through or directly on the grill). I use the foil method. Add wood chips to the fire, cover grill and let salmon cook/smoke until just barely firm. And perhaps attract a few neighbors with it’s amazing fragrance, wafting out o’er your neighborhood. Cut through salmon skin along the spine, peel back, and savor this amazing fish.

I’ve been lucky enough to get up to the salmon giveaway more than once. Here’s the photo of one smoked salmon that was served after a Lakota sweat lodge I was also lucky enough to attend. All the vegetables from my Paonia garden. Blessings to all.

Now all I need to do is find a pole, a friend, and fish for the kokanees myself.